Thessaly La Force, recently published a book with the artist Jane Mount called "My Ideal Bookshelf." In it, Thessaly interviews over 100 people and Jane paints their bookshelves: 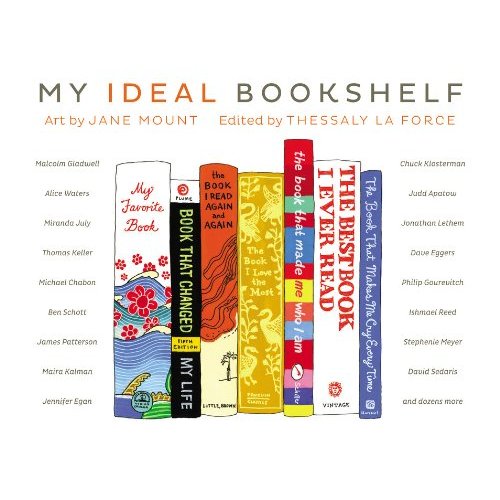 The books that we choose to keep --let alone read-- can say a lot about who we are and how we see ourselves. In My Ideal Bookshelf, dozens of leading cultural figures share the books that matter to them most; books that define their dreams and ambitions and in many cases helped them find their way in the world. Contributors include Malcolm Gladwell, Thomas Keller, Michael Chabon, Alice Waters, and Tony Hawk among many others.

As I observed Jane and Thessaly compile the book over the last year, I couldn't help but think about all the fun opportunities I could have exploring the data behind the shelves.

Each of the 101 contributors Thessaly interviewed picked as many books as they thought represented their ideal bookshelf, and I knew some of them would pick identical books.

So what would a taste graph linking contributors to each other using the books on their shelves look like?

Previously, I had worked with Cytoscape to render a network graphs, but this seemed like a good opportunity to make something interactive and also a perfect first project to really use d3. I can't wait to do more with it.

Each active link is then colored by the neighbor's profession. The nodes at the center of the graph have the most neighbors and exert the most pull over the rest of the graph. Try clicking and dragging a node to get a good feel for its centrality. 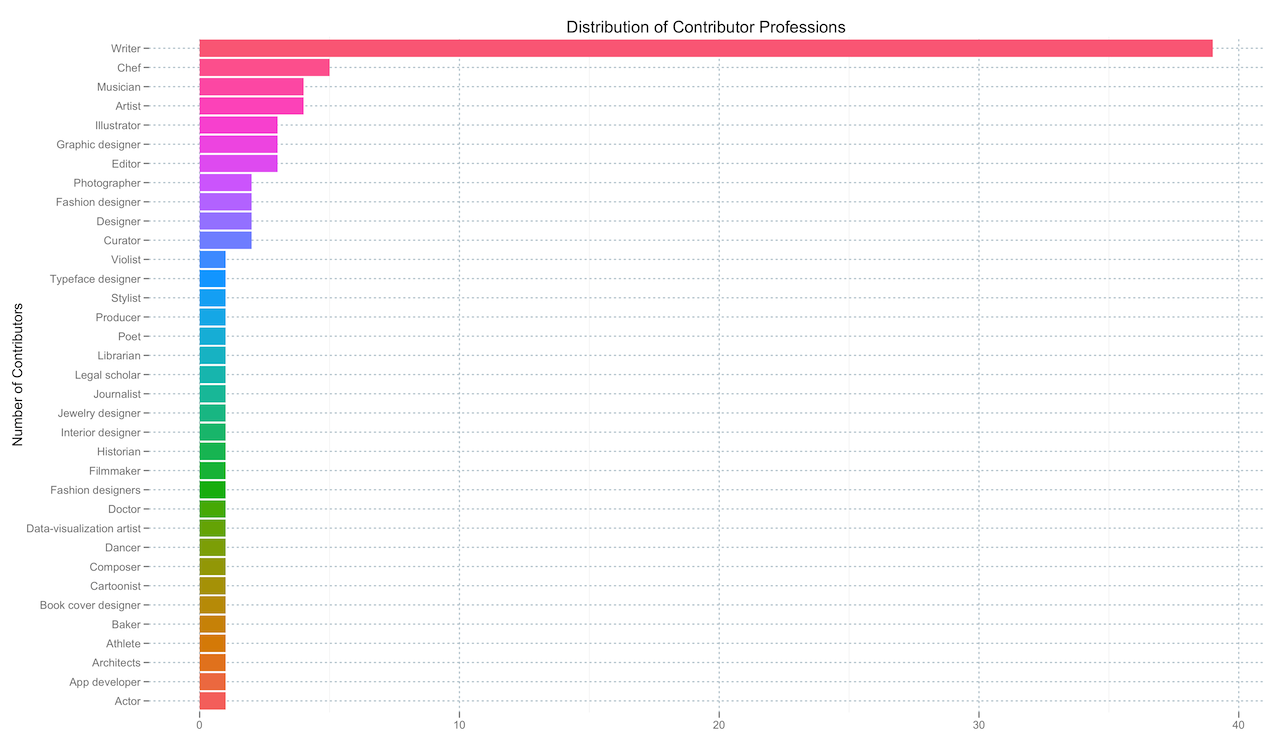 click for larger
The distribution of contributors professions skews heavily toward writers so all the professions aren't evenly represented: 41 out of the 101 bookshelves were from writers, and there were a total of total of 35 unique professions represented. 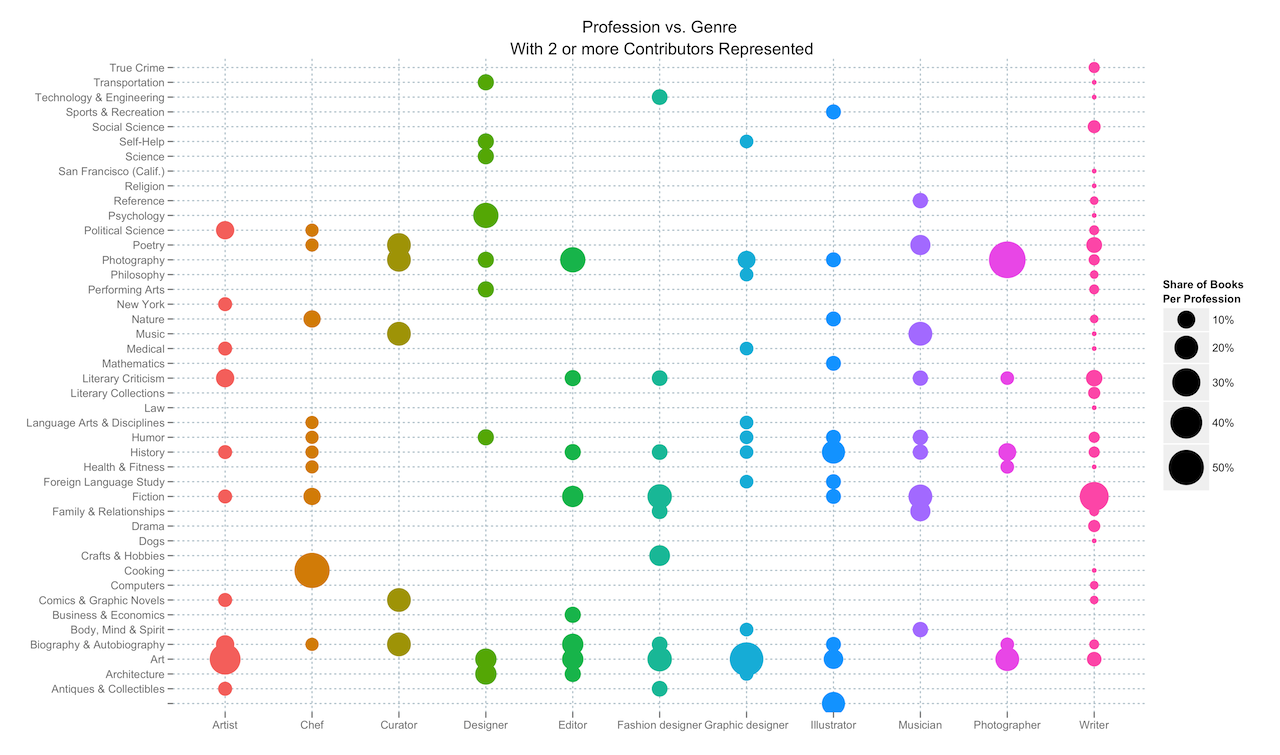 This next graph is a violin plot showing the distribution of page counts of the books chosen by each profession: 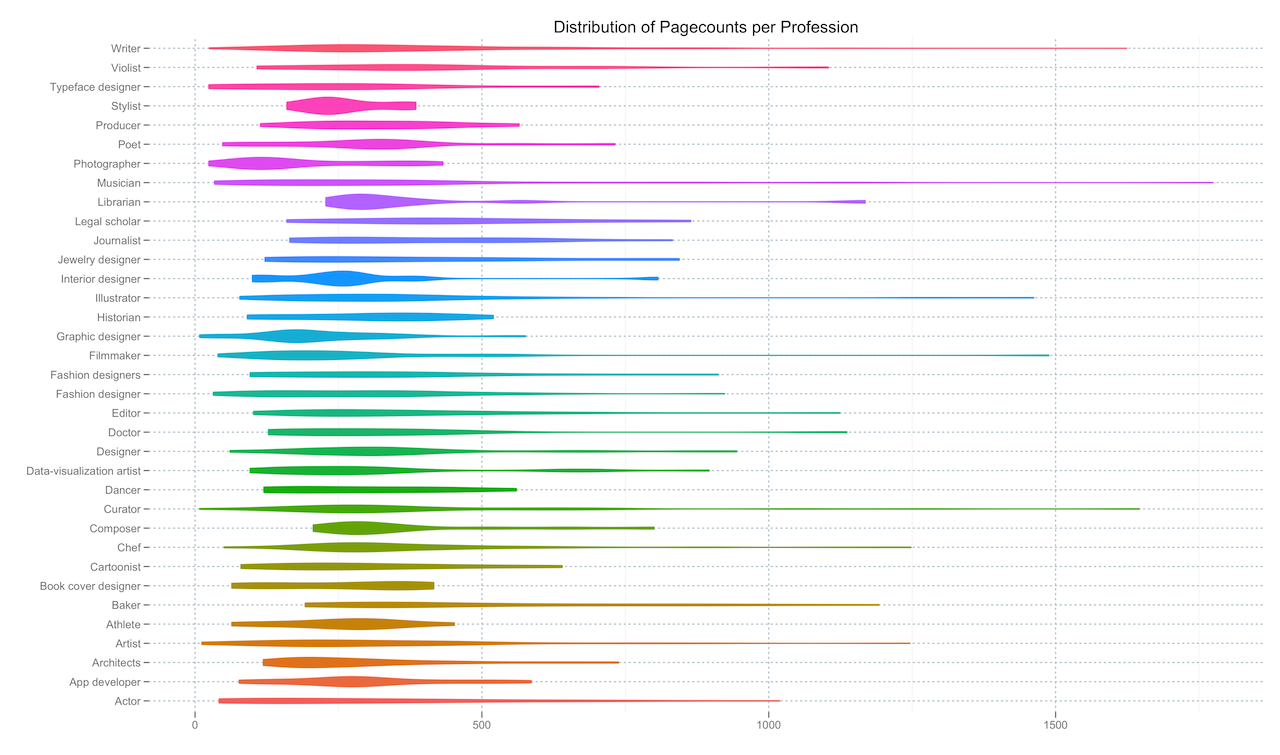 click for larger
Excluding the Oxford English Dictionary which comes in at 22,000 pages, legal scholars (Larry Lessig & Jonathan Zittrain) earned the highest average page count of 475, and all the books chosen by the two photographers had page counts under 500.

Taking it a step farther, here is almost every book (again, excluding the OED) based on the year it was published (X-axis) against the log10 of its page count (Y-axis). 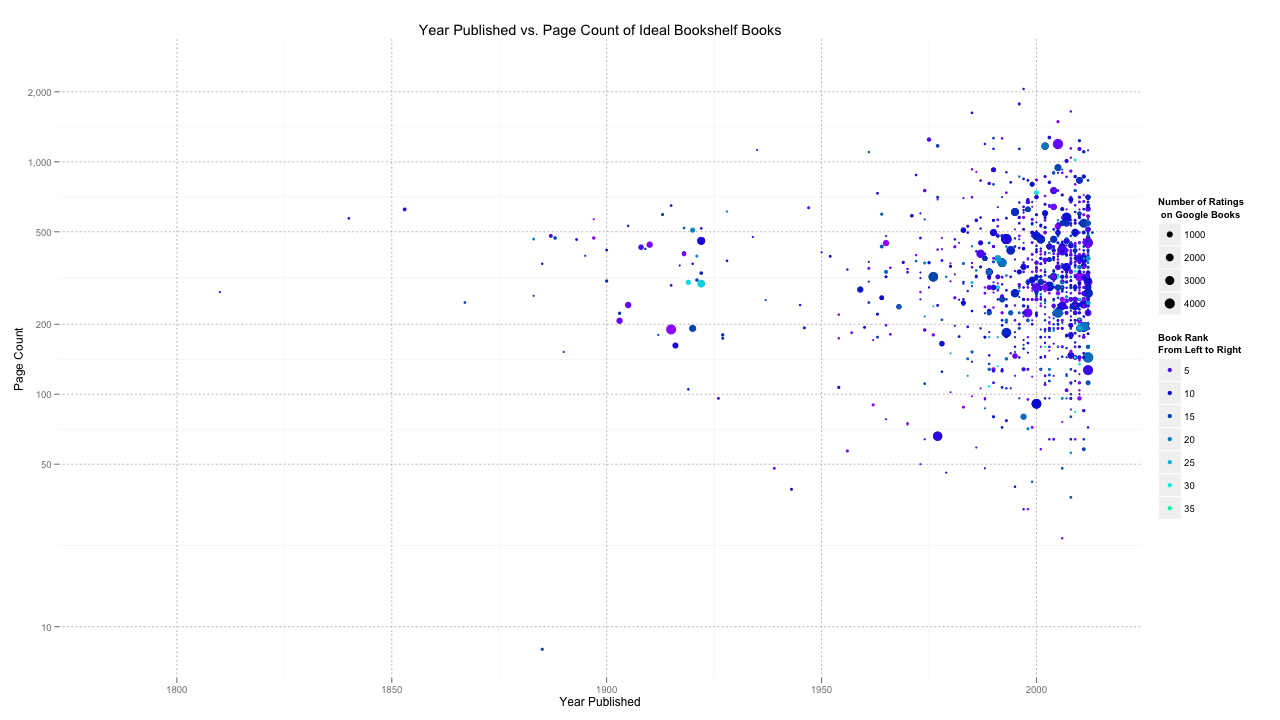 click for larger
The darker the point, the farther on the left of the shelf the book was ordered. Conversely, small teal dots represent books with relatively fewer ratings which were placed towards the right of contributor's shelf.

Unfortunately, not all the books had publishing dates that made sense -- Google reported the dates of Shakespeare's works anywhere from 1853 to 1970 to 2010, and when would you say the Bible was published? 1380? 1450?

Excusing these erroneous points, I think the graph still works -- checkout the cluster of books published in the early 20th century chosen by the writers in the upper left of the graph: they represent popular early 20th century books with page counts between 200 and 500.

* Jane was only able to paint one volume of Stephen's OED for his shelf, but the authors agreed it could stand as a synedoche for his choice of the entire edition.

The data I cobbled together from My Ideal Bookshelf is far from perfect, but I think it does a good job of illustrating some of the larger themes and relationships behind the book.

For example, the books of the two legal scholars tended to picked on average some of the longest books in the set, and that professionals tend to pick books related to their jobs (checkout the large proportion of photography books chosen by photographers). Also: if you're James Franco and pick a ton of books, you're gonna have a lot of neighbors in a network graph.

I also discovered how skewed the dataset was towards the choices of writers -- I jumped in expecting a diverse set of contributors which might be useful for representing an ideal ideal bookshelf -- but that would have been a difficult case to make when 40% of the contributors were from one profession.

This might sound like an obvious observation (and something I should have known having spent so much time thinking about the book), but it wasn't something I was able to really observe until looking at simple histogram of their professions. So remember: its always worth thinking critically about whether your samples are representative of the underlying distribution, and simple exploratory data analysis can really help you out there.

Bigger picture, I think this skew demonstrates the nature of coming up with an ideal list of anything: no matter who you ask, the task is essentially a subjective one. Here, it's biased towards the network Thessaly and Jane were able to tap to make the book.

Cleaning and Reconciling the Data

While creating the book Thessaly and Jane had carefully compiled an organized spreadsheet listing each contributor and their chosen books, but I knew there could be subtle typos here and there. These typos could possibly throw off the larger analysis: if the title of two books was even slightly off or missing some punctuation, then aggregating based on their titles would be problematic. I also wanted additional data about the books (data which Thessaly and Jane didn't record), such as the year the book was published, or the number of pages in the book.

So I figured I'd kill two birds with one stone and look for an API which I could automatically search using the title they had entered into the spreadsheet, and get a best-guess at the "true" book it represented. The API would also hopefully return a lot of useful metadata that I could use down the line.

It turns out Google's Book API is the perfect tool for such a job. I could send a book title to it and get back the book that Google thought I was looking for. This allowed me to lean heavily on Google's excellent search technology to reconcile book titles that might have had typos, while also retrieving the individual book's metadata. While I could have used something like Levenshtein distance to try to find book titles that were close to each other in the original dataset, I wouldn't have been able to retrieve any additional metadata.

A quick side note for copyright nerds: the Google Books API played into the HathiTrust case recently, and I'd like to imagine use cases like this were part of the reasoning behind declaring the Google's use of copyrighted materials a fair use.

Google's Book API allows 1,000 queries a day, but since the list contained thousands, I had to write in and ask for a quota-extension -- thanks to whomever at Google granted that -- I now get to hit it 10,000 times a day, which was enough to iterate building a script to compile the data.

Not surprisingly, Google's API returns a ton of metadata. Everything from a thumbnail representing the book's cover, to the number of pages, to the medium it was originally published, to its ISBN10 and ISBN13 ... the list goes on. I tried to choose fields that I knew would be interesting to aggregate on, but also ones that would help me uniquely identify the books.

One particular piece of metadata that was missing was the genre of the book -- only 28% of the books returned from Google had category information. Another option would have been to set up a Mechanical Turk Task to ask humans to try to determine the books' genres. This kind of book ontology is actually a very difficult and somewhat subjective problem. Just think of how complicated the Dewey Decimal system is.

Finally, not all data is created equal -- I've manually corrected a handful of incorrect classifications from Google where the search results clearly did return the right book, but its certainly possible not all books were recognized or reconciled properly.

Aside from d3 for the interactive plot at the top of this post, I used R and ggplot2 to create the static graphs.

The script I used to query the Google Books API was written in Ruby, and exported the data to a CSV which I then loaded into MySQL and Google Docs to manually review and spot check.

Here's the query I used to generate the data necessary for the force-directed graph:

Sequel Pro's "Copy as JSON" was extremely helpful here -- it took relatively little effort to munge the SQL results into an array of nodes and links required by d3's force layout.

Pickup a copy of Thessaly and Jane's book today!