Part of Microsoft's aggressive Windows 7 TV advertising campaign revolves pairing feature ideas with tongue-in-cheek-reenactments of how those ideas occurred to "real" users. The "real" user retells how and where they came up with the concept and then demonstrates that, hey, Microsoft thought it was a good idea too and hey, look at that its now in Windows 7! Clearly Microsoft is finally listening to its users (as opposed to Windows Vista).

Anyway, these faux testimonials-reenactments never struck me as particularly sincere and after being subjected to one just a couple of minutes ago, I realized that I had seen basically same commercial with another actor claiming to have thought of the same feature. So I went and double checked on YouTube, and indeed, there are two commercials with two totally different men (with different names) claiming to have thought of the "Aero Snap" feature in Windows 7. The former one is the original US one, and the latter one is the UK version.

So, who came up with the idea? For the sake of the argument, let's interpret it in the most generous way possible: two independent, real people named Jake and Ramin came up with the same idea and Microsoft chose to implement it. How cool. 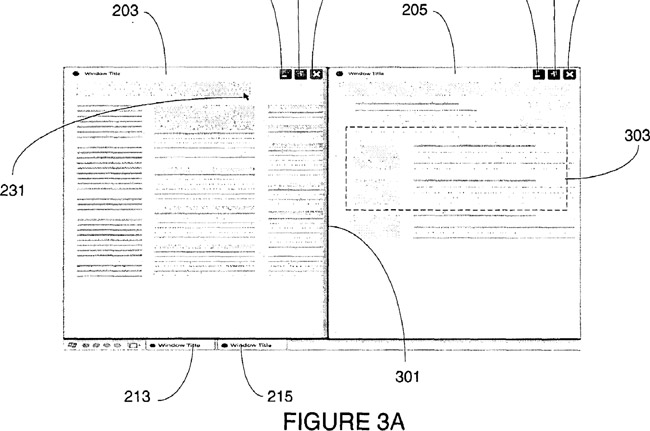 But wait, wouldn't Microsoft probably own a patent on the Aero Snap feature? Sure enough, they do. Its actually a lot more broad and powerful than simply snapping windows, but Microsoft applied for and received the patent in 2005.

And now they have two commercials with two people claiming to have come up with the same idea by themselves. Just imagine if one of those users didn't submit the idea to Microsoft, but merged into a free software project at the same time? (It turns out that KDE, a free software window manager has long had such a feature).

In this generous interpretation Microsoft has implicitly created an argument against patents: independent and simultaneous discovery of inventions. Who do you give the patent to, Jake or Ramin? This is actually a hugely interesting area of contemporary research, and there's been lots of work done to demonstrate that new ideas are almost never new. Kevin Kelly has a good post about it here.

Unfortunately, there's a more likely and cynical explanation for the duplicate commercials: someone at Microsoft "discovered" the concept (here's a MS blog post discussing its development and effectively taking credit for it), and then they did two or more sets of commercials with different demographically-appealing actors claiming credit for the features.