You could say that I'm partial to Lessig's maxim that "code is law."

I also think it goes a long way to explaining some decisions James Cameron made while making Avatar. More specifically, the code and technology responsible for the majority of the movie's (we can't very well go on calling them films much longer, can we?) visual experience actively constrained the choices of the production team and thereby the choices of the Avatar characters themselves. Neytiri couldn't have had voluminous hair even if she wanted to, because James Cameron's hardware and software wasn't good enough.

If you haven't followed computer graphics closely you might not know that certain textures and materials, like hair, are incredibly difficult to get right. Though there has been quite a lot of progress in the realm of still CG, capturing the motion and flow of humanoid hair is still very difficult if not virtually impossible. Cameron's Avatar didn't significantly advance the state of the art, but he was able to creatively sidestep the issue by giving his characters thick braids and dreadlocks which he could motion capture.

This alleviated the chore of trying to artificially generate the realistic movement of millions of individual hairs: if all the Na'avi had braids or dreadlocks, then all of that movement could be motion captured by actors in reality.

Much has been made of Cameron's innovation to accurately develop motion capture for individual facial movements, and it is my strong feeling that the team also took this approach for the hair of their characters. As Wired pointed out in their features on the movie, this is an evolution in the modern director relationship to computer graphics: instead of trying to *simulate* real world phenomena using procedural software, directors opt to direct a close enough analog in the physical world whose motion could be captured at a very high resolution using camera-like devices.

Don't believe me? Check out these screen grabs from the Avatar making of video floating around: 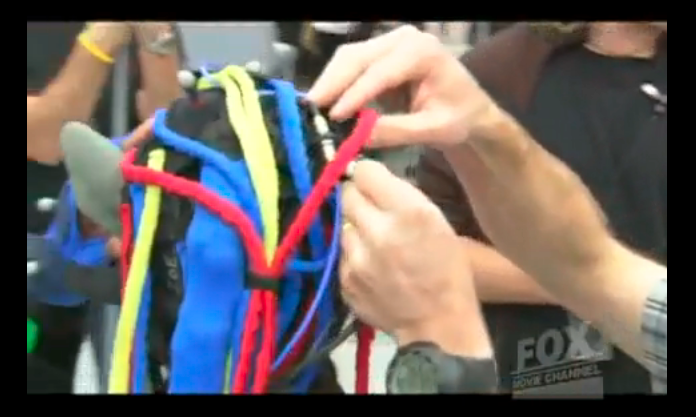 Look closely at Zoe's head and it doesn't require a lot of imagination to believe that her dreadlocks have individual motion capture devices embedded in them. It's also probably true that motion capture systems of this type can not be scaled small enough for individual hairs. This might change in the future, but for now it is a real technological constraint in the world of Pandora. There are a couple other examples of technology constraining creative choice: why don't any animals in the Pandora jungle have fur? Might it be because Cameron couldn't get CG fur to look right?

So Cameron's technological constraints and innovation drove choices that would have have otherwise been purely creative. Code became law on Pandora. Sometimes the origins of code's constraints are artificial (such as copyright law) but sometimes they're just practical constraints like software and CPU horsepower, and I think that's what happened here.

Let me know if you agree or have any evidence to the contrary.