I spent the first week of college living through September 11th in and around New York City and have since endured recurring plane crash nightmares.

Which is why I was relieved to find out after the fact that today's close call with Air Force One and two F-16s was a photo-op rather than another generation-defining tragedy.

Reading the New York Times' extensive coverage of the episode on their blog had me wondering about how the event unfolded on everyone's-favorite-real-time-reporting-source: Twitter. What was the first tweet that observed the fly by? Was it panicked? How many people retweeted it? What would have Twitter looked like on 9/11?

We'll never know, but I've done a bit of searching for terms related to today's news ("nyc plane")* and have discovered one of the first tweets at around 10:30am (around the time of the first flyover) by n8s8e asking JetSetCD whether Obama was supposed to be in NYC: 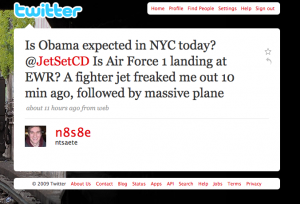 Shortly after, @The_Pace asks a similar question, and then @hugoyles mentions that Goldman's trading floor was evacuated. Then @ChicagoSooner reports that CNBC had confirmed the sightings. @Rithesh asked if there was a plane crash in lower NYC, and then @grapejamboy breaks the news that the Pentagon confirmed the flights as a photo-op. From then on, most tweets cover the story properly.

It's clear that Twitter beat traditional news outlets today in relaying that something was happening with a plane over NYC's downtown skies. However, as @Rithesh's tweet demonstrates, there is potential that misinformation gets disseminated (there was no crash) as well, so the system is not noise proof.

There's also a limit to what can be gleaned from Twitter search at any given moment, and a very real chance that all the signal will itself become noise. As commentators smarter than I have observed, this makes Twitter a fantastic "raw material" in a journalist's process, but not a final product itself.

But really, what's the difference between leaving a search open in Tweetdeck and leaving CNN on in the background?

UPDATE: Zander points out this great piece in the Nieman Journalism lab breaking down the Twitter accounts of today in much better and greater detail than I did.

*This search is not scientific at all and is probably leaving out earlier sightings. I tried searching for "plane" but Twitter's search is frustratingly limited to narrowing queries by day as opposed to hour and minute (which would be ideal here) and will only deliver a max of 1500 results for any term. There are obvious security reasons for this, but it presents a fantastic example of how Twitter can capitalize on search: I'm  willing to shell out a couple of dollars for access to do more sophisticated searching.