I came across a new 'industry initiative' called Arts + Labs to campaign for content filtering on the Free Culture discuss list and Wired Blog. While not traditional astroturf (the fraudulent masking of corporate agenda as a grassroots movement), because they admit that its funded by the telecoms, the campaign language and aesthetic insipidly borrows quite a lot from the Web 2.0, and free culture movements. Can you tell which of the following statements are from Arts + Labs and which are not:

The internet has become our community, our marketplace, our digital neighborhood. The internet connects us to our friends, to culture, to entertainment, to ideas, to the entire world. But the internet doesn't just bring the world to us; it also brings each of us to the world.

As creators and as consumers, each of us should be free to participate and prosper online.

Sorry, trick question -- both sections are from Arts + Labs.

Anyway, what is more curious is that "The ArtLab" blogroll links to sites like TechCrunch, The Register, IP Democracy, Wired Threat Level, etc.

These are all blogs that have covered (and in some cases skewered) the efforts of telecom to filter the internet at the cost of network neutrality for the sake of appeasing big content. This is a brazen and sad attempt at blog diplomacy. It's as if DailyKos added InstaPundit to their blogroll in some effort to be increase bipartisan communication on the blogs. While commendable on some level, does anyone really think that the shills who are writing the blog are going to even mention what GigaOM has to say about Network Neutrality?

I'm not saying someone paid by the telecoms can't write blog posts linking to pro-network neutrality articles. That might even be a good thing. But what I am saying is that statements like this:

Arts+Labs is a coalition of Creative and Technology communities committed to a better, safer internet that works for both artists and consumers. At The ArtLab, we offer our information and ideas; our contribution to the conversation about the future of the internet.

come off as wholly disingenuous because Arts+Labs really represents the interests of a few corporations looking to end network neutrality. This is where the campaign is essentially astroturf and engaging in the kind of "fair and balanced" rhetoric that FOX News and Bill O'Reilly have pioneered. By putting links to blogs that sometimes carry critical (but not too critical -- no links to Slashdot or BoingBoing, mind you) opinions of telecoms they're trying give the false impression that they are interested in discussing things and engaging within a community.

They don't want to think of you as the creators or the editors or the musicians. No, Viacom, NBC Universal, AT&T, Microsoft, Songwriters Guild of America, Cisco, think of you as the consumers. Why else would they have a page of "creativity" and only link to content friendly and corporately funded startups sites like NBC, MTV, and Comedy Central? 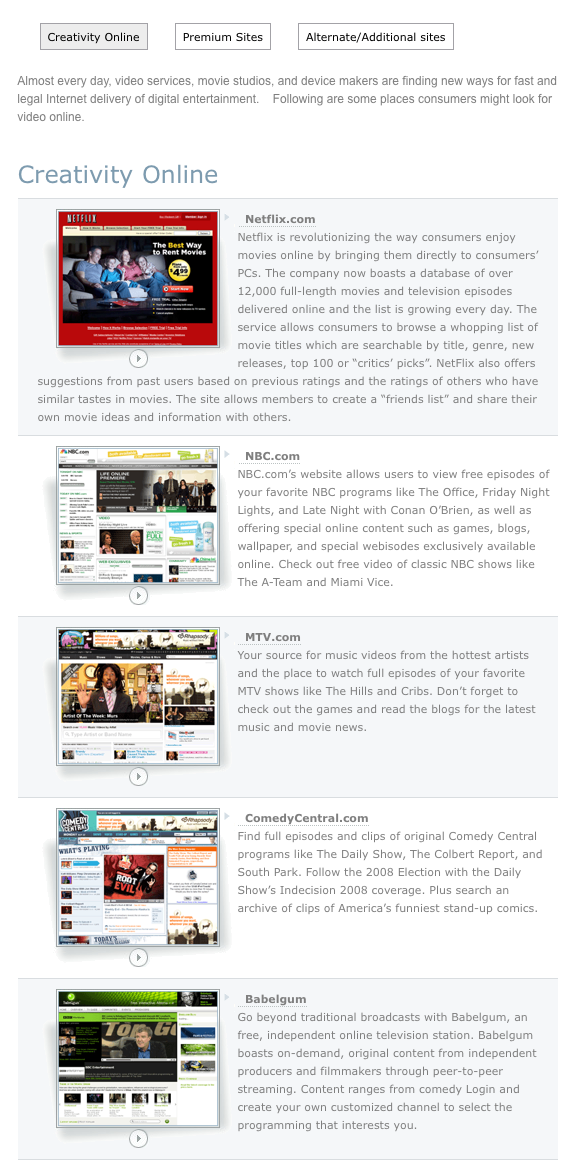 Its because those sites wouldn't have existed in their view of the Internet. In Arts + Labs' universe there is no amateur as creating professional media. There is no free culture, no free exchange of content, and no network neutrality. Their Internet is a Premium Content Destination® where we stayas consumers and they stay as the producers.

Notice, also, how in the above screen shot how they distinguish between "Creativity Online" and "Premium Sites." This is a common tactic when arguing against network neutrality. Content company incumbents like to argue that abolishing network neutrality will encourage development of "premium" content channels on the Internet. That sounds good, right?

But what happens when Wikipedia gets classified as "premium" content and local ISPs, users, and most destructively, the Wikimedia Foundation, all have to start paying premium rates to reach their audience? That's not so good. Wikipedia runs on a shoe string and would likely not be able to raise the exorbitant fees that big telecom would ravage them with. Who knows, maybe it would be time for Encarta to make a comeback. Surely, Microsoft has enough money to pay AT&T to push Wikipedia off the net.

So until Art + Labs adds Wikipedia (or some other actual source of creativity online) to their list of "Creativity Online" I'm classifying this campaign as 100% astroturf.

(photo of Astroturf by Scott Ogle under a Creative Commons 2.0 Attribution License)