Spore, the long awaited evolved version of Sim City by game genius Will Wright has a DRM problem. As of this post, there are 14 "1 Star" reviews versus six 4 and 5 star reviews, by people who said that they won't buy it (which admittedly isn't quite the same as a review of the game itself) because it has DRM: 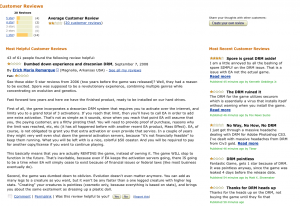 Thus Spore now has an average of 2-stars on Amazon. The game as gotten good but not excellent reviews, so this is surely of concern for the makers as people will probably take the Amazon rating seriously and might not buy.

Is this a concerted campaign to shame EA (Spore's publisher/distributor) or a distributed disorganized consumer reaction against DRM itself? I tried Googling for "Spore DRM campaign" thinking I'd find a Defective By Design campaign about it, but couldn't find anything.

The moment concentrated actions like protests lead to dis-organized collective action and rebellion en masse is very exciting. If these are actual consumers acting in concert but without prompting from a centrally organized campaign then it means that our efforts at establishing DRM as an anti-feature have been successful.

UPDATE: BoingBoing and Kotaku both linked here (thanks) and Spore now has 144 "1-star" reviews, but is #1 in games: