My friend and fellow-NY-techer Noel "Noneck" Hidalgo was deported from China last week. He got rounded up as one of the people documenting the "Free Tibet" protests in Tienanmen square. Here's the video he shot:

What's interesting is that Facebook seems to be censoring Noneck's posts about his deportation -- his original status updates were deleted but the comments referencing them stayed. My friend Elizabeth observed that all of Noneck's Facebook status updates that referenced "deportation" have been changed to

Anyone familiar with what this could mean? At first I thought it was geo-coordinates, but that doesn't seem likely as they aren't recognizable longitude / latitude numbers. Update: Here's a screenshot: 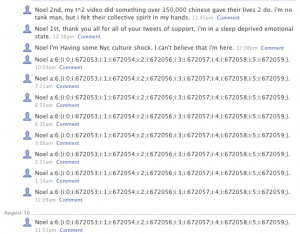 In other news, the IOC is now using copyright to assert ownership over their trademarked logo. They have sent a take-down notice to YouTube demanding that video of a demonstration in NYC be removed since it uses their logo. YouTube is in the habit of taking any videos down if there's a copyright claim, so it is not surprising they obliged the IOC. But what's not clear is why the IOC thinks they have a copyright claim over their logo. Usually the only infringement claims regarding logos are founded on trademark law, not copyright law.

Copyright is designed to restrict use of creative original works by granting a limited monopoly to the works creator. In the United States any work copyrighted prior to 1923 is in the public domain. Even if the Olympic ring logo was copyrighted at the time of its inception (1913), it would now have lapsed into the public domain, so the IOC wouldn't have a copyright claim to it.

Wikipedia seems to have come to a fairly schizophrenic conclusion about this. On the one hand, it states that the logo is in the public domain. But on the other hand, it says the use of the logo is restricted by the IOC's manual, which is a whopping 105 pages. Pages 20 and 27 have information about how the logo is used, but it's not totally clear to me what laws the IOC believes protects their copyright in a logo created prior to 1923. Wikipedia also states that the logo is an insignia and its use is restricted and is independent of any copyright claims. I've heard that the IOC will simply refuse to allow a country to bid in the city-selection-process if they feel that their rights are not being protected there.

If anything the logo is protected by trademark law, which is designed to give legal recourse to manufacturers and corporations against counterfeits and confusingly similar marks. Typically use of logos for journalistic purposes or even incidental use by anyone else, is not grounds for claims of trademark infringement. Thus, it makes little sense that a video could infringe on trademarks (so long as they weren't using an NBC logo in the logo in the corner, etc.).

My feeling is that the IOC likes to squash Tibet-related videos involving the IOC's logo. Their dubious DMCA take down notice is a clear example of a corporation using copyright to stifle free speech.

Anyway, I am not a lawyer, so this is shouldn't be construed as anything but a lay opinion.